Honor launched their latest device at an event in the capital today. Honor Play is the first smartphone from the company to come with GPU Turbo tech out of the box.

The device has a FullView 6.3″ LCD with 19:5:9 aspect ratio sporting an impressive 89% screen-to-body ratio. It is powered by the company’s flagship Kirin 970 SoC which made its debut last year in November within the Huawei Mate 10. GPU Turbo tech optimises the processor and GPU to boost performance without adversely affecting battery life as is usually the case with resource intensive games. For now only certain games like PUBG and two others make use of it but more might be announced in the near future. According to company officials, this will also help with OS animations in a coming update.

On the rear is dual camera setup consisting of a 16MP primary sensor with f/2.2 and 2MP depth sensor with f/2.4 while the front has a 16MP single sensor. A separate Neuronal Processing Unit (NPU) has been dedicated to AI features. Scene Detection and Portrait Mode will primarily benefit from this. A 3750mAh battery should provide ample backup with the Type-C USB port capable of fast charging. There is also the promise of a ‘4D gaming experience’ with real-time recognition of game visuals vibrating similar to gaming controllers. 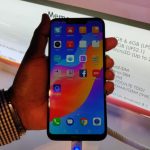 Front of the Honor Play 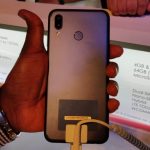 Rear of the Honor Play