After unveiling the device last month, HTC has launched the U11 in India. It follows the U Ultra and U Play which were released earlier in the year. The U11 is the successor to the HTC 10 from last year with the U referring to the new design language the company has adopted.

Edge Sense, the USP of the phone, allows users to ‘squeeze’ the edges of the U11 to perform different functions. Pressure sensors get triggered when squeezed and it even works underwater as well as when wearing gloves. Short squeeze as well as squeeze and hold activate separate functions. However, it won’t work when any external soft or hard casing is used.

The Liquid Surface design which was first seen in the HTC U Ultra has been further refined with the device using a glass and metal amalgamation that changes colour depending on the angle from which it is viewed. The display is protected by Corning Gorilla Glass 5. A USB Type-C port on the bottom serves triple duty by handling charging, data transfer and audio transmission as there is no 3.5mm headphone jack. This is because the device is IP67 water, dust and splash resistant.

The rear camera is equipped with a f/1.7 aperture, 5-axis Optical Image Stabilisation (OIS) and UltraSpeed AutoFocus. Coming to the front snapper, it has f/2.0 aperture and a 150 degree wide angle lens. Audio quality is enhanced with bundled U Sonic earphones using advanced sonar like technology which adapts the sound profile to a user’s ear structure. External speakers also receive a boost with BoomSound stereo speakers said to be 100% louder and improved by 150% over the previous iteration. HTC Sense Companion, Google Assistant and Amazon Alexa are the 3 AI assistants bundled on the device.

The U11 is priced at Rs.51,990 and will be available exclusively on Amazon India from the last week of June. Pre-orders on the HTC store will begin from 17 June and those customers will receive a free HTC flip-cover worth Rs.1,999. 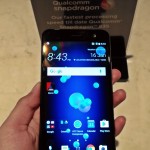 The front of the HTC U11 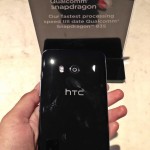 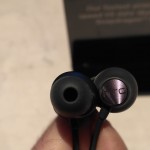 The bundled U Sonic earphones